Is your washing machine really complying with the energy label it boasts?

A few years ago, the diesel scandal put the attention of consumers, policy makers and market surveillance authorities to the issue of ‘circumvention’. Hidden devices were discovered in vehicles enabling compliance with emission limits during test conditions but surpassing those limits in real use. In analogy, what does this mean for our domestic appliances in our homes? Is the energy consumption of our fridges, washing machines or ovens really in line with the featured energy labels?

In the EU, the national market surveillance authorities (MSAs) are responsible to ensure that products on the market are compliant with existing laws and regulations. Many of them joined the H2020 funded ANTICSS (Anti-Circumvention of Standards for better market Surveillance) project, which aimed to find out whether circumventions are also possible under the EU Ecodesign and energy labelling legislation. 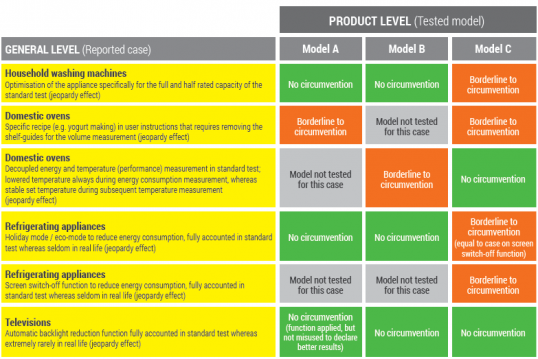 The impacts of circumvention are wide-ranging, from market distortion and unfair competition to loss of reputation for manufactures / industry. They also include loss of trust from consumers on the effectiveness of EU legislation and standards and finally, more inefficient appliances with higher green house gas emissions.

The ANTICSS project published its final report and put forward a number of recommendations and findings suggesting that the project identified new ways of circumvention. According to the project, existing loopholes in EU legislation should be closed to ensure continued trust of consumers and a more effective contribution to the EU’s 2030 climate and energy targets.

The final report can be downloaded here.
More information on the project: www.anti-circumvention.eu